It was the night of 31st December of 2002, at the award ceremony of TVM’s Inter-Office Teledrama Competition which was held earlier that year, Ministry of Atolls Administration, the Ministry I represented with historical drama, November 3 was losing out in all the categories. The awards for best director and best drama were remaining. By then, I had given up hope on winning any from those two.

Though to win the best director award, the only award Atolls won that night, was a consolation, but receiving it from an exceptional filmmaker was a moment to cherish. It was not only an honour but even salvaged my New Year’s Eve from becoming a disappointment.

That was the first time I came face to face with this filmmaker who was not only an alumnus of this competition but also made a name for himself by previously winning best director three years in a row. His transition to filmdom was swift and successful. In a short period, he made it to the top of the finest directors’ list of the local film industry and to date, he remains as a cut above the rest. He is director Abdul Fatthaah. 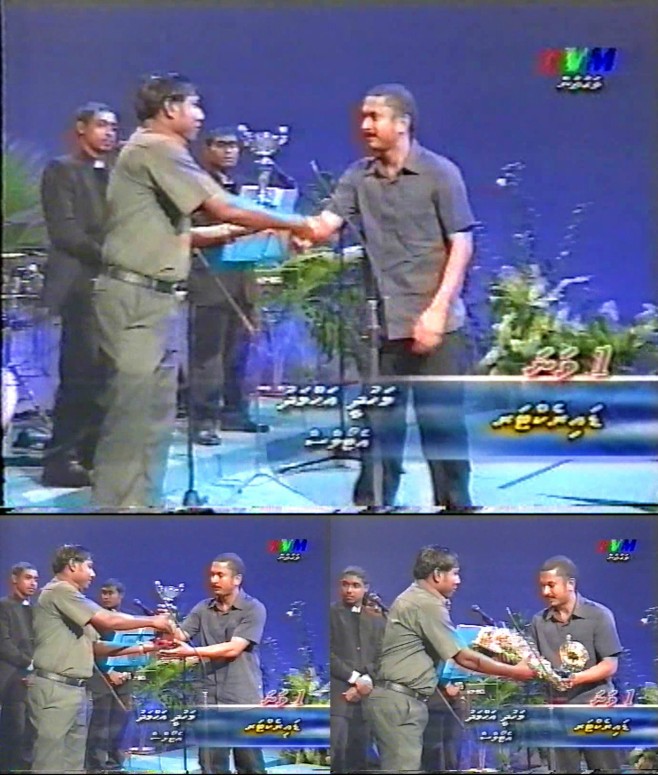 Although that night I closed the door to this competition for good after having successfully represented Atolls for five consecutive years, winning a total of 14 awards, almost two years later, Fatthaah opened a new one for me.

It was one morning of January 2005, and I was waiting outside my office, which was located on the Marine Drive back then. Fatthaah stopped on his motorbike right next to me. He asked me for my mobile number which, without any hesitation, I gave. He went on his way, and I went inside my office. A few minutes later, I received a call from an unknown number. I answered it, and it was him. He said he just wanted to assure that if it was my number. I laughed, and the rest was history.

As I look back on my 12 years of collaboration with him and still counting, it gives me a smile on my face and a joy to my heart as it was in this very collaboration that allowed me to develop and enrich my screenwriting craft. He gave me all the creative freedom to experiment whatever I wanted. And for that, I thank him with all my heart.

My first work with him was 2005 melodrama, Hureemey Inthizaarugai. But writing it was the most unconventional in my screenwriting career so far. Due to scheduling conflicts of the production, I had to write the third act first and within 08 days.

Since Fatthaah was a solid director and to experience what it’s like to be breaking the rules, I threw caution to the wind and decided to step out of my comfort zone. I only had a few plot points that he gave me for the first, second act and couple of specific scenes that he wanted to stage for the third act. So based on all these points and scenes, I outlined the third act. It was both challenging and nerve-wracking. But I must admit that it was fun.

In 2005, TV drama of 13 episodes, Kuramey Vadhaai Salaam, which Fatthaah directed was a starring vehicle for newcomer Mariyam Afeefa. It was a warm-up for her to her leading role in the feature film, Vaa Loabi Engeynama produced by Fatthaah in 2006. The film went on to win a total of 12 accolades at the 5th National Film Awards including Best Picture and Best Actress for Afee.

On the late morning of 21st February 2006, Fatthaah and I met at West Park to discuss a TV drama of 52 episodes that he was going to produce and direct for TVM under his production banner, Red Productions. He already had a concept and a catchy title. He also had three actors selected for the lead. It was about the ups and downs of the life of two childhood female friends as they grew up on an island. He specifically wanted the first 32 episodes to be set in his birth island, Ha. Kelai. And the remaining episodes in Male’. The serial was called Hinithunvelaashey Kalaa.

Since I love writing on female protagonists, this serial had two, and I instantly got hooked on his concept. It only took me a whole week to outline the entire serial. When I presented the outline, he had nothing to add. I started writing a day or two later.

Like yesterday, I still remember the hunger I had, which was overflowing from my mind and heart, when I wrote this serial. I was so drowned deep into this world of these two ladies, and I even had to set a goal of writing an episode per day since Fatthaah sailed off with his cast and crew to start production. And yes, it took me 32 days to finish the needed 32 episodes.

I remember on weekends waking up in the middle of the night, starts writing and continued until late morning and sometimes until afternoon. I was writing non-stop. And it is in this very series that I refined my favourite of genre, rom-com. One of the main characters in this series was Inaa, who’s a bit tomboyish. But her interaction with Adeel, a drug addict who’s been banished to her island, has several unforgettable rom-com moments thrown around in several episodes. Their parts and the entire series was well received by the public.

Even after 11 years, I still feel upset when Fatthaah changed one of my favourite scenes I wrote in this series. Her community loved inaa, and she does everything that men did, including participating in a cultural stick dance only performed by men. But that stick dance scene of Inaa with all the men was altered by Fatthaah claiming that women don’t participate in such traditional dances. That was the whole point. Guess women empowerment was not a serious subject back then.

In 2007 I tried a full-blown comedy with Aharenge Lha Daddy which Fatthaah produced and directed for TVM. Everyone loved this miniseries of 5 episodes, which focused on an ageing father who’s still young at heart and liked dating young girls.

Vaudhey Mi Ee was another TV series of 13 episodes he directed for TVM. He also wrote the first eight episodes. But he commissioned me to write from episodes 9-13. It was aired in 2013.

Though we didn’t collaborate in any serials or films since 2013, I had a stint in writing five short documentaries on the environment that he directed for UNDP.

To think about the amount of writing I did for all the serials and films included, it’s like I have written a total of 35 feature-length films of 90 minutes.

After his last film, Aadheys directed in 2014, Fatthaah is set to return to the silver screen with his 12th direction, Hahdhu with a loud bang. My prediction is that it’s going to be louder or loudest even. For this film, he has revamped his visual style completely. Though he has made his visual flair more current, he has added the most effective and challenging old-school film making technique, the long play. And he doesn’t over-do it. His new style has brought a sense of realism to the entire narrative of the film. And it has allowed every actor to shine brightly. And he hasn’t given up on showing off his eye for landscape either. The travelogue experience will be a bonus.

Speaking of Hahdhu, it was written back in 2009 as a project he wanted to do with Dash Studio with an entirely different working title, on a simple concept he came up with. Due to unforeseen circumstances, the project was shelved. Guess it happened for a very good reason. Having it halted for eight years, allowed him to mature, grow, and when he gained his confidence, he completely overhauled his visual style. I salute him for the risk he has taken for the development of our local film industry and to entertain the audience who complains about local films not meeting their expectations. Hahdhu has all the right ingredients to blow out the expectation roof.

Hahdhu will be premiered on 06th September 2017.