I rate Aminath Rishfa as one of the few determined actors working in the local film industry today endowed with beauty, talent, and self-confidence. She is truly in a league of her own. She takes her roles in her creative manner, spins them and delivers with unexpected enthusiasm, and she has never failed to surprise me, every time.

There, I have rated her. End of my post. Cheers! 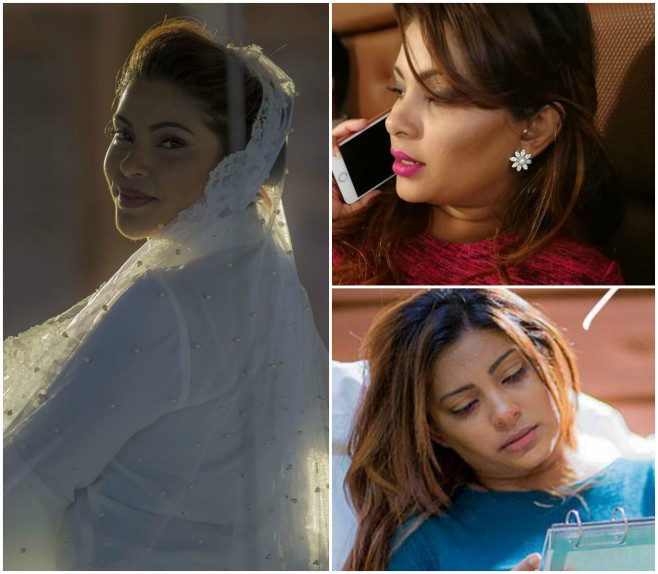 No way I can end this. A little while ago, I just watched some of the newly edited scenes of her upcoming film, Hahdhu and I have so much to write. Speaking of which, there’s an inside joke that if I start writing, my posts end up as essays. Here’s a disclaimer this time. I will not be responsible if this post causes eye strain.

Very recently I posted my very thoughts on Rishfa as a status update on my FB account and now this, I thought, I would, here on my blog. Consider this a follow-up but on a different platform. And yes, it’s going to be a long piece. So here I am feeling all keyboard happy and delighted to have seen almost all of her scenes.

If my memory serves me right, Rishfa’s arrival into filmdom was at a time when the undying love for Dhivehi films was in distress. The audience was demanding for fresh faces. Her debut was in a song appropriately titled, Dheyshey mi bunaa loabi translated, give (me) this love I’m asking. But it was her second song with established actor, Mohamed Manik that made her so famous. In this song, she appeared like an angel and restored the much-needed love and hope of the audience. And coincidentally she was in all whites, sans feathery wings though.

After that song, she became the most sought-after actress appearing in many video songs, later stepping into TV series before hitting the big screen.

My favourite director, Ravee Farooq’s segment of Hatharu Halha anthology called Qaathil was her first work on a screenplay that I have written, I mean, co-written to be precise. Yes, that unfortunate anthology that has been delayed at post-production indefinitely. But I’m still hopeful that we will get to see it.

In Ravee’s segment, she plays a vulnerable friend of a very manipulative female drug addict. The former hit a moral dilemma of whether to compromise her friendship or turn in for a heinous crime they have committed. She was up against Mariyam Majda who at that time started working in feature films. Both ladies gave terrific performances, and they were also very bold at accepting their respective roles. Since Ravee, in my opinion, was unfairly removed from the project, I heard, I repeat, I heard that his segment went through a harsh re-editing which derailed the director’s original vision that not only hurt both actors no holds barred performances but also the film’s brooding narrative. But I hope what I heard was untrue.

When Rishfa was cast in Dhilakani directed by Hussain Munawwar, honestly, I wasn’t any sure if she could pull off her character. It was only her role in this film that I was doubtful of. She was in a supporting role in which her emotions had to be restrained, yet she had to be, by nature, very positive. Her character was the only ray of light in a very dark-toned narrative which focuses on a man’s tumultuous journey to avenge his brother’s death. But she proved me utterly wrong by giving an outstanding performance that outdid my original perception of her character. She made the character more joyful, playful, yet layered and controlled. No wonder she won the best-supporting actress award for her role at the Maldives Film Awards 2012.

Later, she was cast in Ali Seezan directed Ahsham in which she played a very independent woman, a role she played with her eyes closed.

In my FB mentioned above status, I remember stating how tasteful Rishfa’s scenes have made to the entire narrative of Hahdhu. And with more new scenes of her’s added, it’s getting tastier and tastier. It made me feel like I didn’t want to finish sipping that freshly brewed cup of tea with a dash of Jasmine. And when I was done watching, I wanted another cup.

In Haddhu, she plays Zamha, a woman with her life all sorted out who suddenly finds her whole life crumbling down before her own eyes drowning herself in a fathomless sea of grief. She handled her character arc so well, allowing the audience to experience both stages of her life. Previously I watched this one song of hers with several missing shots. But today, when I watched that same song completed with all the missing shots, I felt as if someone forcefully squeezed my heart. And halfway through the song, my flood gates opened. Risfa was brilliant, and I regard this as the best performance of her career by many miles. Director Fatthaah was observing me and the smile on his face, and I am so sure would even put the Cheshire cat to shame.

Hahdhu will be premiered on 06 September 2017. Tickets are now available from Olympus.

One Response to “RATING RISHFA”