It’s a rare occurrence for a failed plan to get resurrected and become a successful one. At least for me it was. Moments after the production team of INGILI deemed Plan C a bomb, we somehow felt that we should check out K. GULHI ourselves before deciding that place inappropriate. So we went back to Plan C as scheduled and eventually, trusting our instincts has really paid off.

Yesterday at 1410, we sailed off to K. GULHI despite the shaky start to the proceedings. The sea was a tad rough since the climate looked confused whether to rain or shine. Nevertheless, our production team was having a blast. The team included producer/ director RAVI, his DP, our production manager, one of the actors who actually had the connection with the island, TED who’s helping as our production consultant who keep reminding us that his consultancy meter was running from day one and then there was me, the screenwriter who’s also one of the producers, my very first producing gig.

It took us around 30 minutes to reach K. GULHI where we were welcomed by 4 friends of the actor. One of them, a good carpenter, also happened to be a friend of our production manager. This carpenter friend will be overseeing the building of the set.

We started scouting around the island almost immediately, checking the outskirts first. But we were feeling very discouraged as we declined location after location. None was living up to director RAVI’s visuals. We were almost giving up when they took us to the last spot of the island, which turned out to be THE SPOT we were looking for. This location had thick foliage all around with a space in the middle enough to build our set, as if this spot was waiting to be found. 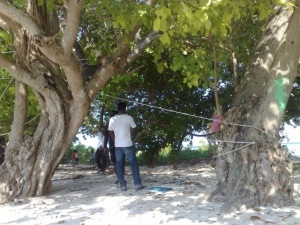 We immediately started measuring the space to the measurement given in the design. And bingo, it fitted like a glove! We have asked for a quotation to make the set and hopefully either today or tomorrow, we will get it. If their quotation fits our budget, the set will be made. We have also worked on other important dynamics of the production.

After spending 2 hours, we sailed off from GULHI on scheduled time. We couldn’t careless of the rougher sea as we were joyful to have the production of INGILI back on track.

The night ended on a happier note for me. At around 11 something, SEEZAN called to inform that VAFAATHERI KEHIVERIYAA was also back on track.

One Response to “back on track…”